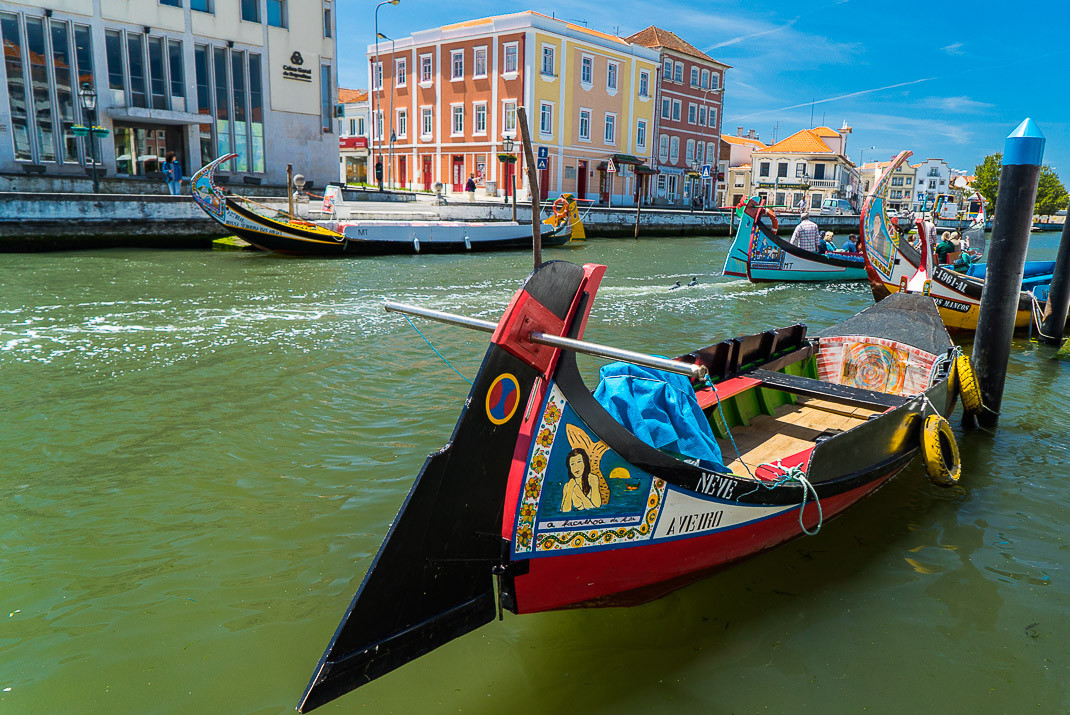 Spending the Day in Artsy Aveiro

After the dense urban cityscape of Lisbon, I was looking for something a bit more low key before my next stop in Porto.

After a few hours of searching around the web, I came across the small town of Aveiro, known throughout the country as the Portuguese Venice. And at a glance this definitely seems fitting, as even a quick image search will return image after image of brightly colored gondolas slicing through the centrally located canal. These images were unlike anything I’d seen in Portugal thus far. As luck would have it, the train station stop was already conveniently located along the same route as Porto.

So with everything just about fitting into place, I quickly booked a nice affordable spot on AirBnB and was off in search of a Venetian-ish escape. After a short 90 minute train ride (thank you European train efficiency!), I had arrived at the Aveiro station. Luckily I was staying only a short distance away, so I quickly made the walk down to check in, threw my backpack and belongings on the floor and took off towards the center of town to see if the “Venice of Portugal” lived up to the hype (or at least my own internal hype). Making my way through town, I was completely blown away by the general artistry and vibrant colors that were on display. Even the sidewalks were tastefully tiled, and may of the walls were decorated with murals to tell the story of Aveiro’s maritime roots. As I explored deeper into the center of town, the real visual standout quickly became the beautiful handmade tiles. All the product of the nearby porcelain factory, which has been crafting seemingly infinite patterns since the early 19th century, it felt like every corner I turned presented me with a new sampling. After spending a fair amount of time lost in a sea of endless patterns, I slowly shook off the porcelain haze and got back on track towards searching out these gondolas. Lucky for me, a quick map check showed that I was only a few blocks away. I hustled my pace up a bit and, after a quick bridge crossing, there they were… It seemed nice enough, but not overly impressive. The requisite pieces are there technically, but they don’t quite fit as seamlessly as their Italian brethren.

First and foremost, Aveiro’s canals are much smaller in scope and only wrap around a small part of town before heading back out to the large lagoon. The boats themselves appear as larger versions of the classic gondolas and are powered via motor, with the ability to ferry up to 20 passengers at a time.

All of this to say, you’ll be disappointed if you travel here expecting to take a nice private cruise with your significant other, all while your gondolier sings sweet melodies as he nimbly maneuvers through honeycombed canals. What somewhat made up for this though (at least for me and my admittedly immature sense of humor) were the unique and sometimes risqué images displayed on the ends of each boat. Often the hand-painted scene depicts something idilic, such as the below monk standing in front of a serene stream… But sometimes, these scenes could get a little racy and go from humorous… Later, I asked my host about these and she just replied with something about sailors and their sense of humor. Regardless, I’m completely not ashamed to admit that I had a blast running around to each boat in the canal to see if it had a new and different ridiculous image on display. After having had my fill of dirty sailor paintings, I continued walking down the canal until I hit what appeared to be an older pastry shop. Much like Lisbon has their egg tarts, the locals here are extremely proud of their Ovos Moles de Aveiro (translates to soft eggs of Aveiro), which are little 2-ingredient pastries in the shape of different seashells. These little shells are only made up of egg yolks and sugar, which sounds extremely simple, but everyone treats these as serious business.

All I knew was that I was in store for something sweet and very very rich, which really did not have me wound up with anticipation.

I picked up one ovos moles and another pastry, this one in the shape of a boat, and took them outside to enjoy in the sun (and for glamour shots to share with you fine folks). I had for a brief moment considered just stocking up on all different types of pastries and just calling it dinner which, believe you me, I’m definitely not above. As soon as I took my first bite from the ovos moles though, I was relieved that I hadn’t gone this route. The pale outside shell resembled a sugary thin layer of baked meringue that crumbled away, revealing a smooth core so sweet my teeth attempted to wiggle out of my skull towards freedom. Hoping for a bit of balance out of the boat cookie, I took a small bite and was immediately smacked with another hit of sugary yolk filling. It was now safe to say that these were definitely not my thing. After one more quick nibble of the ovos moles, I just had to call it quits and tossed the uneaten bits.

“Oh well.  Guess this just means that I’ll actually have to find real food for dinner.”

So, the “Venice of Portugal” tag is a bit of an oversell for Aveiro. But, if you temper your expectations around this specific aspect and instead focus a few days around exploring a vibrant and beautiful city, you’ll still have a blast.