“Are you threatening me?!” a member of the large party joining our Douro Valley tour called out to the driver as she squeezed into the back of the narrow van.

“Not at all,” the driver calmly responded. “I’m just saying that if you feel like there isn’t enough room and you would rather not go, we would be happy to refund your money.”

Our perturbed passenger did not take kindly to this and hissed back with, “That is not acceptable! We will go but we will be leaving negative reviews for both you and your company. Now how long is the drive?”

“2 hours until our first stop…” the driver chirped back as he closed the door to our van before anyone could respond back.

As the van started moving down the street, I glanced over at a few of the other passengers and subtly shook my head. What was supposed to be a calm boozy tour of Portugal’s historic Douro Valley had certainly started with a bang. Great… This was my last day in Portugal, and the Douro Valley was a part of my trip that I was looking forward to the most. Throughout my time here, just about everyone I ran into absolutely swooned when they heard I would be visiting this area. “The river is so beautiful; The colors are so beautiful; The port wine you will taste is so beautiful…” With such high praise orbiting around my head, it was safe to say that I had high expectations.

So this rough start to the day really helped to bring everything back down to earth, starting with my own pick-up. What was supposed to be an easy bright and early 8am departure ended up being more in the 8:45am range. No call, no email, nothing at all to inform me that there was a delay. Not a big deal, as years of travel has taught me that it’s always best to just go with the flow and remain as flexible as possible.

Eventually though, the extremely apologetic driver Alex did show up and, after swooping to pick up our remaining passengers, we were on our way out to the Douro Valley. Our 1st stop was at a small winery named D’origem. Stuffed steeply into hills over Casal de Loivos, this place is relatively recent, having only been established since 2001. Still, the owner and chief winemaker comes from a family of vinters, so he certainly knows his stuff. After a brief introduction, he lead us into a cool stone room that was set up with a couple of ancient olive presses that his family had once used to produce oil. These were some seriously massive contraptions. We then got to what everyone was here for: sampling some wine. This area was tastefully positioned next to an old grape stomping trough that had supposedly been in use at some point in the past. Definitely a cozy spot. Interestingly, D’origem does not make a port wine, which is what’s predominantly produced in this area. Lucky for them though, they still make a damn good red wine, so they get a pass.

Our noticeably cheerier group now all piled back into the car and took a quick drive down the hill to the river town of Pinhão. Here we divided into two different groups, with everyone that had signed-up (and paid extra) for a river cruise hopping aboard a boat, while anyone that hadn’t stayed on shore. It turns out that this cruise is popular stuff because, after all was said and done, I ended up being the only one on shore. This was fine with me though, as guided group tours always make me a bit antsy to break off on my own. This ended up being a perfect amount of time for me, as the group returned right when I had satisfied my wander-itch.

Once we had gathered back up, the group walked over to one of the nearby local restaurants. It was about time for lunch and we were in for a treat. The tour company had arranged for a hearty 3 course meal, along with plenty of delicious Douro Valley wine, which all sounded amazing to me. This meal was made up of farinheira (a doughy smoked sausage), goat stew, and wine braised ribs, all served with plenty of rice and potatoes. I was so overwhelmed with choices and the food coma was so intense that I completely failed to get even a single snapshot of this feast. Disappointing for sure.

Just know that it was delicious and sopped up any lingering buzz that anyone may have been feeling.

After we had all eaten our weight in local Portuguese cuisine, and downed 2-3 strong shots of expresso, we were back on the road towards our final destination: Quinta de Santa Eufemia. But to get there, we once again had to thread the van through steep winding cobblestone streets, which did no favors for our overstuffed bellies. But before too long, pulled alongside our destination and were presented with yet another amazing Douro Valley view. After a few minutes of gawking, we were warmly greeted by one of the great granddaughters of Quinta de Santa Eufemia’s founder. She brought us into the winery and proceeded to give us a healthy dose of background on her family, who have been making port wine since the mid 1800’s. Once the walk-around was over, we all settled down to taste the full spectrum of port wines – starting with white, moving onto tawny, and then finishing off with ruby. All were absolutely delicious, which says something given that I’m not the biggest fan of port (usually a bit too sweet for me). These though were very well balanced and had a nice rounded out flavor that I could have kept on drinking all day. Let’s just say that I made sure to find several reasons to taste and compare each port type multiple times…

By the time we had to hit the road back to Porto, the group dynamic had made a complete turnaround (with a little help from some liquid infused good times). What started out as an awkward and acidic tour ended with large smiles and deep laughter from everyone involved.

A testament to the beautiful Douro Valley and the power of port? It sure seemed like it. Whatever the reason though, I couldn’t think of a better way to end my time in Portugal. 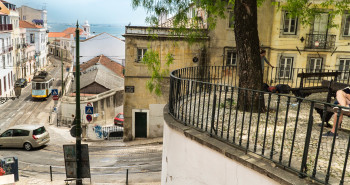