Warning: Creating default object from empty value in /home/customer/www/globeslice.com/public_html/wp-content/themes/throne/include/options/ReduxCore/inc/class.redux_filesystem.php on line 29
 The Breathtaking Castle In the Sky on Mount Popa - GlobeSlice

The Breathtaking Castle In the Sky on Mount Popa

I continued muttering expletives to myself as I wandered through the yard of yet another mountainside home. When my driver Aung had dropped me off at the roadside entrance to Mount Popa earlier, he had promised that there was no possible way I could get lost. So much for that.

To make things even more frustrating, I just needed to look out towards the horizon to see exactly where I wanted to get to. It was impossible to miss.

For me, Mount Popa really was one of those destinations that I was all in for after seeing only one picture. It just looked so enticingly mysterious.

A big part of this is thanks to Taung Kalat, a large golden temple that rests 2,500 ft above sea level on a jutting volcanic plug and can only be reached by climbing 777 steps that coil around the base.

The locals have various legends surrounding this site, but the most widely accepted is that the mountain was created around 400 B.C. by massive earthquakes. Since then it is believed that some of Myanmar’s most important nats (Buddhist spirits) have taken residence here, much like Mount Olympus.

As soon as I touched down in Bagan, one of the first things I made sure to book was a driver through my hotel, the Six Star Guest House. $40 USD and a few days later, I was being dropped off in front of an ornate mirrored gate that framed Mount Popa in the distance perfectly.

Getting there at least seemed pretty straightforward.

The pathway started out as a nice stroll, past numerous smaller temples and a strangely grumpy looking statue.

Soon after though, the path became steeper, curvier, and much less defined. Before I knew it I was completely lost and making my way through a small mountainous neighborhood. The more I wandered around, the more wrong things felt.

Not wanting to make the situation any worse, I took a seat on a set of nearby steps and whipped out my phone, thinking that perhaps Google Maps would prove helpful – it didn’t. Shoving the device back into my pocket, I began to scan around hoping to find something, anything, that could prove useful. What I didn’t notice was the figure in orange that had carefully and quietly positioned themselves behind me.

Startled, I jumped up and spun around to see a lone monk looking at me inquisitively. I returned the hello and mentioned that I was looking for Mount Popa. He gave me a quick head nod and began to shuffle past me.

We walked no more than 10 minutes, up a steep path and across a wide bridge, before we came to a very long staircase. The monk motioned that this was where I needed to be going.

Thanking him profusely, I began to make my way down the steps towards a wider road, where it was clear that I was once again back on the correct path.

A few minutes later I had made my way down to the entryway, where I was introduced to Mount Popa’s next challenge…

Spread throughout the entire complex are hundreds of aggressive wild monkeys that aren’t afraid to snatch anything that has even the slightest chance of being edible. The local shops don’t help with this and, for only a few coins, will sell visitors small paper tubes filled with primate chow.

As a result, the monkeys just sit around and wait to be fed, but aren’t afraid to get all up in your business to expedite the process.

And again, these creatures are absolutely everywhere. There’s just no escaping them.

Making matters worse, all visitors have walk up barefoot as part of Buddhist temple custom. So hundreds of wild animals + a steady stream of food = plenty of opportunities to step into a fresh pile of monkey poop.

Even the thought of this was enough to quell any excitement I had for seeing all of these cute little babies running around.

Making my way up past the initial wave of furry hooligans at the entrance, I caught my first glimpse at what I’d be looking at for the next 45 or so minutes – stairs, stairs, and more stairs.

At first the climb up wasn’t all that bad. The steps are nicely tiled, decently spaced apart, and not all that steep. There are even small little rest areas to can catch your breath after a particularly long climb.

Before too long, the sweepers started showing up. Essentially local volunteers who help to keep a section of steps clean in exchange for tips, these guys are the monkeys sworn enemies. To protect their area from fresh primate rectal evacuations, the sweepers come equipped with some mean looking slingshots and they aren’t afraid to use them.

After a few long stretches of some relatively soft steps, the remainder of the way wasn’t looking quite as comfortable.

The scratchy rust covered surfaces alone were enough to make me thankful that my tetanus vaccine was up to date. As a bit of a balance though, the view looking out was getting better the further up I got.

After 777 steps and around an hour of huffing and puffing, I had finally made it to the golden temple on top of Mount Popa.

Honestly, I didn’t find the temple itself all that impressive, especially after having just explored the millennium old structures of Old Bagan. There are a few old artifacts and large golden spires which people were praying around, but after half an hour of wandering around I felt like I had seen everything.

The real star of the show however had to be the breathtaking and expansive view, which I could have just sat and enjoyed for hours on end.

Even the few monkeys that were hanging around up top seemed to be absolutely blown away by what they were seeing.

As I began to make my down the steep steps of Mount Popa, dodging new bits of monkey excrement along the way, I couldn’t help but feel some anxiety starting to build up. How the heck was I eventually going to find Aung when I got to the bottom? Hopefully I won’t need another monk to show me the way back to the road…

Eventually the base entryway came into sight and to my extreme relief, there was Aung waiting for me. I was so overjoyed to see him that I wasn’t looking where I was placing my feet and felt something cold and sticky squish between my toes.

I didn’t even need to look down to know what I had stepped in. 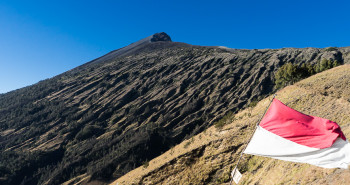 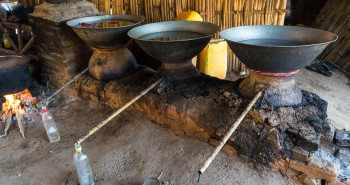 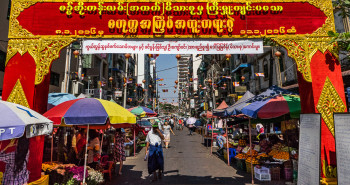 What’s For Sale at the Awesome Yangon...