Being surrounded by all that raw nature on our Serengeti safari adventure was amazing. But after multiple consecutive days, it had left both Tristen and I dusty, sunburnt, and ready for a return to some form of civilization.

In researching where we would go next, Zanzibar and its nice relaxing tropical vibe sounded like the perfect transition. Luckily its also conveniently located along the standard flight route that just about every small airline uses within the Serengeti. These two points were more than enough to convince us. So without much additional thought, we were off to what we hoped would be our paradise. Apart from a brief mix-up with the airline that resulted in Tristen and I having to ride in separate aircraft, we made it to Zanzibar safe and sound. We had booked a bungalow at Matemwe Lodge, located within the small fishing of Matemwe on the North-Eastern side of the island. This property is also part of the Asilia group, and we were once again impressed with their commitment to local support and sustainability.

Much like what we found with Namiri Plains, the grounds themselves were very comfortable and tastefully incorporated into the natural landscape.

Now, full disclosure: Matemwe Lodge is definitely a full-on resort, complete with neon tinted tropical drinks and coconuts with straws sticking out the top. Usually I cringe at the thought of these types of places and run as fast as I can in the opposite direction. But not this time.

Perhaps it’s the smaller, more intimate environment, with space for only around 20 people max. Or maybe it was the fact that their brightly colored cocktails didn’t skimp on the alcohol. Either way I was completely disarmed and able to relax. The bungalow itself wasn’t too shabby either! Ours had a nicely decorated interior, soft king sized bed, full bathroom, and an outdoor patio complete with a hammock and gorgeous ocean views. After a few nights, the management even upgraded us to the more exclusive area, dubbed Matemwe Retreat. Here, we were one of 4 groups that each had our own private 2-story villa. These villas were seriously swanky, with lush bedroom/bathroom accommodations and a dining area equipped with comfy couches, a well stocked fridge, and stellar views everywhere. The best part though was the 2nd floor which, after ascending a spiral staircase, opened up to panoramic views of the entire coast. Did I mention there was a private plunge pool and social area? These arrangements were nothing short of decadent. But for 2 people…? Maybe if we were part of a larger group that we could invite over to help utilize the amazing space. With only us though, it just felt like a bit too much real estate.

After a lazy day of taking full advantage of our upgrade, it was time to actually get out and explore. Because Matemwe Lodge has such a great relationship with the village, they offer small walking tours with a member of their staff (almost all of whom are locals).

The town itself is small, with about 4,000 residents, and is still dependent on fishing. Every morning the fisherman would go out during low tide and return with their catch, selling whatever they could to the nearby hotels. Our first introductions were with the fishing boats, which are incredible. Each one carved by hand from the trunk of a single mango tree, the same way they’ve been doing it for hundreds of years.

Upon returning from a long day at sea, the fishermen drag their boats ashore so that they can dry out (no waterproof coating here). This created an eerie sight, as by mid-day the surrounding beaches would be crowded with waterlogged wooden dhows. From the beach, we moved up through the village, passing group after group of children playing. It wasn’t a school day, so they were all scattered about town, entertaining themselves in any way they could. This included running up to the strange foreign man with a camera and asking to have their picture taken so that they could see an image of themselves. As we moved throughout the village and got a closer look at the buildings, we began to notice a rough, handmade quality to them.

“Are these made of mud?” I asked our guide.

“Yes. And rocks and sticks and tin for the roof.” He then went on to explain the process, in that first a wooden frame for the house is constructed, complete with tin roof. Then, petrified coral rocks are thrown into a very hot fire, cooled, and crushed down into a powder that is mixed with mud. This mixture is then applied to the frame and allowed to dry, forming walls. Simple as that.

He them motioned over a building that was surrounded by large branches and giant petrified stones. “Construction materials.” “Just make sure to build your roof first, or else your house will wash away when it rains.” Towering over the village were numerous multi-story concrete structures, many seemingly unfinished. According to our guide, these were all intended to be hotels that had run out of money mid-construction. Rather than tear the empty shells down to preserve the natural coastline for the villagers, the government has decided to leave them standing, in the hopes that they can one day be continued. We eventually made our way up to the school, which Asilia and Matemwe Lodge helps to support. Currently around 500 students attend, which is something everyone around the village was especially proud of. The principal, a seemingly sweet and soft spoken man, proceeded to give us a bit of history on the school. Throughout this, it was clear the level of pride he has for his work, and pictures of students and class projects filled up every space along the walls. He then continued on with all of the challenges that the school was continually facing. Lack of pencils and paper, outdated textbooks, and a high drop-out rate were all examples of the daily struggles of trying to maintain a school out here. This all boiled down to a lack of funds, which he explained as he proceeded to ask us for a donation.

The sympathy card, and these kinds of situations in general, always sketch me out a bit. I’d like to think I’m an empathetic being, but how am I supposed to know that this money will be directed appropriately? In terms of legitimacy, this seemed real enough though. We didn’t have cash on us anyway, so we’d have to go back to the hotel to grab a donation. Upon hearing this, the principal quickly responded that he’d meet us there later, which sounded fine with us. We walked back to our retreat along the beach, past the well-worn dhows, houses made by hand, and fishermen cleaning their catches from the day.

By the time we made it back to the hotel, the school’s principal was already waiting for us at the entrance steps. I quickly ducked into our room to grab a bit of our cash and returned, handing it to him with a smile. He thanked both of us profusely and then handed us a beat-up old book notebook to sign. As I looked through the pages, names of people from all over the world had been scribbled with various messages and amounts.

Now it was my turn, and I was drawing a complete blank. I’m terrible at writing messages for Thank You cards, so a few parting words was no easy feat. I copied the first thing that came into my mind and closed the book before handing it back. Looking to see what I had written, the principal smiled and gave me a single head-nod before walking away. 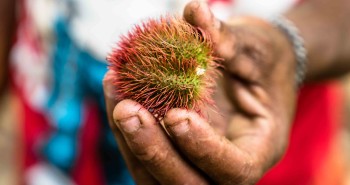 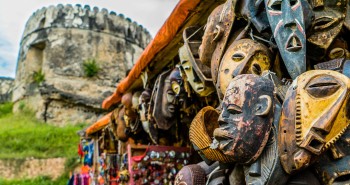