After a week in Tangier, I wasn’t quite ready yet for my next planned stop in Marrakech. The idea of going back-to-back with crowded cities just didn’t sit right with me. I still needed to head down in that direction though so, after a quick look at the Moroccan railway map and a bit of online research, I found what seemed like an interesting location for a quick pit stop: the small fishing town of Safi. Traveling by train from Tangier, the trip in total takes almost 12 total hours with a couple of quick transfers. By the time we pulled in to Safi’s small single platform station, it was pitch black outside and the streets were almost completely empty. Not how I like showing up in a new unfamiliar place. Once again, I had only a vague idea where I was going, with little to no assistance from Google maps to direct me within the walls of the Medina.

Also not helping was that, much like my arrival experience in Tangier, the driver of the taxi I had hopped into had no idea where my riad was. Ready for this, I whipped out my printed confirmation to show him the phone number listed and, after a quick call in Arabic, we were back on our way.

As we pulled up to the sidewalk, the large group of bothersome touts that had swarmed me in Tangier were nowhere to be found. Instead the streets appeared tranquil – exactly what I was looking for.

After grabbing my backpack and paying the driver, I began to make my way into the dark and empty Medina of Safi. Well, almost empty. Two figures, both a man and woman, suddenly emerged from one of the inky pathways and began making their way towards me. Great. Maybe it was a bit too soon to celebrate the lack of touts. At least, I hoped these were just touts…

I had no idea what they were asking, but I certainly wasn’t going to cough up any money. With a quick head shake and a no thank you, I began to walk away. Before I could take more than a couple of steps though, my taxi driver shouted out to me.

“No, no. They are FROM your guesthouse!”

Music to my ears! I turned back around, apologized to the mysterious figures, and followed them back to the very comfy Riad Le Coeval Blanc. In addition to being an all around comfortable place to stay, the other big benefit with Riad Le Cheval Blanc is that they have a full unobstructed view of the entire shoreline from their roof. So when I finally crawled out of bed and put on some clothes the next morning, I quickly made my way up to the rooftop for breakfast. Luckily it was a bright and sunny day – perfect exploration weather for the few hours I had before my train to Marrakech. After gobbling up some fresh bread with cheese, I was ready to see what I could find. Because Safi is such a small town with little tourism in place, it was back to being in wander mode with no real plan of attack.

Riad Le Cheval Blanc is already located right at the entrance of Safi’s medina, so I figured that this was as good as anywhere to start things off. Everything was a bit busier than it had been the previous night. Shopkeepers now had their stalls set-up and were standing nearby, patiently waiting for the next purchase offer to come through. The crowd made their way down the wide main street, occasionally stopping to browse, but not in a particular hurry.

Overall everything was just nice, calm, and well organized, a far cry from the markets of the Tangier Medina. Something that was quickly noticeable though was that everyone got instantly uncomfortable whenever I had my camera out. So much so that I ended up having to switch to my trusty camera phone for some of these. Apparently, being so heavily off the beaten tourist path, the sight of a foreigner snapping away pictures isn’t so common in Safi the way it is in Tangier or Marrakech.

From the Medina, I made my way out through the ancient fortress walls that had been constructed by Portuguese occupiers during the 16th century. Continuing down this walkway and along the coast, I eventually found myself standing along the docks. On one side a large wooden ship and been propped up on stilts and was surrounded by a small crew working on repairs. Opposite this, an pop-up fish market had been set up to sell the catch of the day from the local fishermen. As I was snapping away with my phone camera, one of the local fishermen spotted me and began to walk over.

“Hello there. Where are you from?”

When I told him I was from the US, he lit up with a big smile.

“Long way from here! Are you enjoying our town?”

I returned the smile and said how much I was enjoying the calm atmosphere.

“Ah yes. Much more than the other big cities. Enjoy the calm while you can, eh?”

A good tip to be sure and a sign of things to come. My departure from this nice peaceful surprise of a town was growing closer, so I made my way back to Riad Le Cheval Blanc, where my already packed bag was waiting. With a few extra minutes available, I decided to walk the 30 minutes to the train station rather than pay for a taxi (savings!).

This allowed me to take in the peaceful coastline of Safi, complete with its ancient ruins, just one last time. Enjoying my last few breaths of salty sea air, I thought about how wonderful this little overnight stop had ended up being. Really a perfect moment to catch my breath before heading back into the sensory overloaded streets of Marrakech. 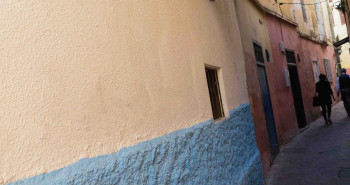