“Beware – Do NOT go with this company for your Sahara Desert tour.

Holy shit… Now that’s what I call a convincing review.

Having had my fill of exploration and food in Marrakech, it was time to move on to the portion of my trip that I was most excited about – camping out in the Sahara desert. I wasn’t even fully sure of exactly how I’d get out there or what I’d do when I arrived. Just that I needed to experience it – see the dunes, touch the sand, and feel the desert heat.

Some advice I had received beforehand was that it’s best to just book your tour through a riad or hostel when you arrive to get the best deal. If there’s one thing I like while traveling solo abroad it’s savings, so this sounded perfect to me.

As soon as I arrived at the beautiful Riad Des Eaux et Des Espices, one of the first things I did was tell the manager that I was interested in booking a Sahara Desert tour. His ears perked up… “Ah, so you haven’t purchased your desert tour yet? No problem. I will show you to the tour offices in the morning.”

The next morning, as promised, I was shown the way to the tour office, where a rather disheveled man offered me a 3-day/2-night tour, breakfast and dinner included, for only 1,000 dirhams (about $100 USD). Overall it sounded fine and was definitely in the cheaper range, but something about this guy just seemed off. I took his card anyway and told him I’d think about it, which dropped the price down to 750. Tempting, but I wanted to research a bit more before biting.

As soon as I got back to my riad, I popped open my laptop and came across quotes like the opener to this post. All in all the feedback was mixed, but I really wasn’t sure I wanted to risk it. From what I could tell this company, and many others like it around Marrakech, acts as a middle man for another larger company that actually runs the tour.

Not sounding so great, but what other options do I have? A quick search on TripAdvisor revealed there to be TONS, most of which are perfect 5 star businesses! But almost all are private tours – perfect if you have a small group, but way too expensive for your average solo traveler. Not an option for me, so I began to look into hotels within the small desert town of Merzouga, which borders the Sahara and is where most tour groups end up anyway.

I eventually came across Hotel Mohayut, which has their own private desert camp with plenty of camels, a fire, and private tents. Even better, November is the start of the low season in Morocco, so I was able to arrange 2 nights (1 at the hotel and 1 at the camp) for only $75 USD total. Quite a steal considering this also included meals (breakfast and dinner), a 1-hour camel ride to/from camp, and a private tent. Sure, it would only be for an overnight, but that seemed like plenty of time for me to feel satisfied.

So now I had a place locked down, but I still needed to get out there. This also ended up having a surprisingly easy solution, as Morocco’s national bus operator SupraTours offers a direct 12-hour route from Marrakech to Merzouga for around $24.

Done and done. I was off on my all day bus ride for my Sahara Desert tour. By the time I arrived at the hotel that night, I was pretty wrecked. While the bus itself was comfortable enough and fully air conditioned, driving through the narrow, curvy, death defying roads of the Atlas Mountains hadn’t left me feeling so hot. I wanted nothing more than to lay on a stationary object that wasn’t rocking side-to-side, seemingly ready to tip over at any moment. So as soon as my body hit that bed, I made sure that that’s where it stayed for as long as possible.

The next day, my small 5 person group of Sahara Desert tour participants gathered in the afternoon and were introduced to our individual camels. Each was named after a different classic rocker, though my unbiased favorite just so happened to be the one assigned to me – Jimi Hendrix. Jimi was an overall mellow camel who, from time to time let out strange gurgling sounds. He remained steady and surefooted when it was showtime for him though. Surprisingly close to his namesake actually.

Out in the desert, being surrounded by nothing but sand and sun, it was hard not to feel blown away by the natural artistry presented. As the sun began to set, casting a warm golden glow over everything, things got even more beautiful. After the sun disappeared behind the sandy horizon, our Berber group leader Bassou stood up and turned to me, flashing a wide toothy smile.

“Come on America, time to go. I hope you bring something warmer than those short pants and shirt. It is going to be a cold night.”

Of course, all I had packed for this leg of my journey was a pair of travel shorts and a long sleeved, moisture wicking, polyester top. Exactly what I didn’t need for a night in the Sahara.

I began to follow behind and jokingly volleyed back.

“Thanks Bassou. That sure would have been good information before leaving everything back at the hotel…”

Bassou laughed and said something to Jimi, causing the camel to crouch down so that I could climb on its back. It didn’t take us much longer to make it over to the camp, which appeared as a simple circle of covered tents nestled between the Sahara dunes. In the center of the circle, handmade Berber rugs had been laid down to create a patchwork floor. Inside each tent was a simple cot and mattress, with just enough bedding to keep you warm at night. It was all pretty cosy and plenty warm at night when the frigid Sahara winds kicked up.

Luckily, the cool air didn’t have much time to attack my exposed legs, as Bassou led the group into a nice and toasty tent for dinner. Here they treated us to large chicken tagines, with plenty dates for dessert. As we finished up, we were invited outside, where a large roaring bonfire had been set up while we were eating. With the group snuggling into the sand, Bassou broke out a set of drums and began to sing traditional Berber songs – his soft melodies drifting over the silent dunes.

Before sending us off to our tents to close out 1st day of our Sahara Desert tour, we were given one more sip of tea to enjoy under the stars. As my alarm went off at 5:15am, it took me a while to figure out exactly where I was. After a few head-shakes to remove the cobwebs, I remembered that I had in fact woken up in the middle of the Sahara Desert. Unbelievable, even if it was just right outside my tent flap.

Throwing on cloths, I made my way out to the just barely lit dunes. A few of the others from the group were already climbing their way up to find a nice perch for sunrise, so I figured I’d do the same. It didn’t take long and, being in the middle of a desert, there were plenty of options. I made my way out and up until I found a patch of sand that seemed just as good as any.

While I was waiting, I spotted in the distance what appeared to be a dog making its way towards me. We were both equally cautious but accepting, and neither of us scared the other away. He continued to approach until he was right in front of me and then plopped down comfortably. Did he belong to one of the camps? Was he wild? Who knows. Not too far behind him was a larger group of 4 or 5 dogs. These guys weren’t nearly as friendly though, and immediately began to arch their backs, bare their teeth, and growl in a way that didn’t make we want to stick around. I understood loud and clear, so I retreated much further back.

The comfortable dog wasn’t very phased by his buddies. Seeing that I had cleared out, they continued making their way up and over the dunes, picking up my former furry friend along the way.

By this time the sun was being to rise, casting yet another golden glow over the sand. Even now seeing this display coming from the East, the view was just as amazing. Also noteworthy was just how hot everything got as soon as the sun crested over the dunes. Suddenly things weren’t so chilly and I was completely comfortable again being in my short pants and shirt.

As the sun continued to rise, Bassou gathered up all of our camels and called to us to let everyone know that it was time to head back. He had prepared some sweet mint tea as a pick-me up, which he poured for everyone and handed a glass to me with a smile.

“Good morning America. I saw that you make some new friends! Don’t worry, it is not you. They don’t like most people.”

I drank my tea and gave Bassou a smile while nodding my head. What do I even say to that?

With a few quick sips, the group had finished our tea and were ready to all head out. Making our way back to Hotel Mohayut, I couldn’t help but give myself a mental high five. This Sahara Desert Tour had all turned out pretty well, and I had spent only a bit more cash than if I had gone with one of the large groups from Marrakech. Looking around, there seemed to be no better place than here to enjoy this small victory.

This was the Sahara. I had made it, and it was spectacular. 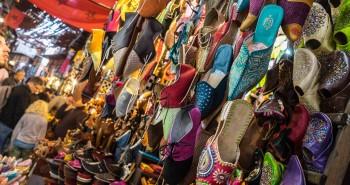