Between the rickety train travel and slowly drifting down the Ayeyarwady River, it had taken over 24 hours to finally get to Bagan.

24 hours where I had dodged both derailment and detainment. But I made it safely with most of my sanity intact. I even still had a few hours of daylight remaining, which was just enough time to fit in a quick visit to one of Bagan’s most important temples – Shwezigon Pagoda.

At a glance, it would be easy to mistake Shwezigon Pagoda as the nearly identical twin of Shwedagon in Yangon. After all, both are large, ancient, similarly shaped golden temples. But much like the cities themselves, what you’ll find in Bagan is a much calmer, more intimate experience than what you’re likely to have in bustling Yangon.

Shwezigon was constructed by King Anawrahta during the 11th century to house his many religious artifacts, supposedly including actual bones from the Buddha.  As legend has it, the building site was chosen by attaching one of these bones to a white elephant (considered sacred in the Buddhist religion) and allowing it to roam freely. When it stopped to rest on a nearby dune, it was decided that this was where construction would begin.

Upon arriving though, the scene at the entrance wasn’t exactly what I was expecting from one of Myanmar’s most sacred structures…

Absolutely packed with random takeaway gifts, this appeared as a reminder really of the tourism boom that the entire country of Myanmar is experiencing, along with everything that comes with it. Compared to Shwedagon, the scene here was much more intense.

Luckily though, the shopkeepers are all relatively friendly and, with a polite head shake, you can continue on your way unbothered. Nowhere near as pushy as the vendors I encountered in Marrakech.

Once you’re past the entrance though, all of these shops are nowhere to be seen and everything starts to feel appropriately mellow.

Much like Shwedagon, the inner courtyard here contains various colorful structures and statues. Though, much like the central pagoda itself, everything is on a much smaller and more intimate scale.

Shwezigon Pagoda being a smaller structure, I felt like I had seen just about everything after 2 laps. Of course, it also didn’t help that I was still very exhausted from my travels and was more than ready to pass out back at the hotel.

While the beautiful Shwezigon Pagoda is totally worth checking out, its smaller size only provides an hour or two worth of exploration. Perfect for when you only have time for a quick activity and aren’t yet feeling temple fatigued. 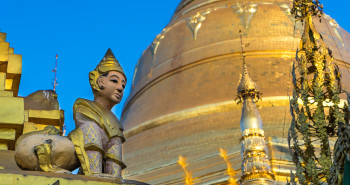